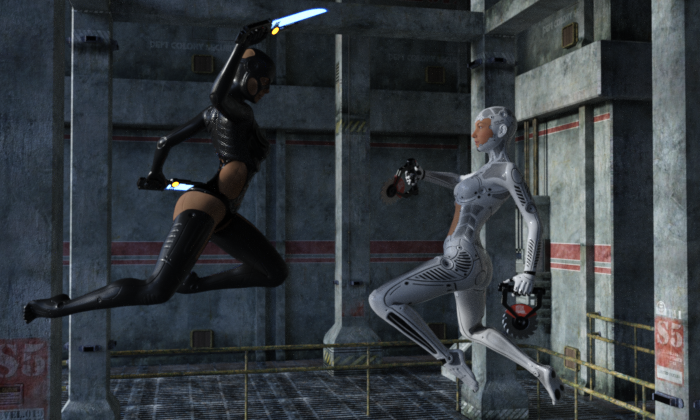 What follows is an excerpt from the character association descriptions, in this case the mercenary Cyborg character. The Cyborg is one of several character types, and is geared towards players that lean more towards combative solutions to issues they encounter.

Good heavens, what did you do to this thing?  You do realize this is attached to you, don’t you?  Just because it doesn’t register pain doesn’t mean it can’t break.

Yeah, yeah, I can fix it.  You just hold yourself still.  Read a magazine.  This is going to pinch off and on as I do some welds here.

So, what, pray tell, were you doing to get this kind of damage?  Looks like you took a severe blast to your arm here?  None of my business?  You want this fixed?  That’s better.  You took it running from a T-Poc, eh?  You could have told me sooner.  Going to need to snag this vial of hydrogen peroxide here.

Watch this.  You’re damn lucky because those goons didn’t activate the homing beacon yet.  You see this bullet shell I pulled from you?  You’re lucky it hit metal and not flesh.  I’m going to drop it in this peroxide here.  See how it’s bubbling?  It’s killing the virus.  That’s right.  Virus.  If this hit your other arm there, you’d be dead by now.  A victim of Gen-Tac, or something else really nasty.  I hear some of those guys have Doom-4 now.  Very icky.

So you want any improvements while I’m in here?  I see you got the internal gauss.  Mark-2, though, you want an upgrade?  Yeah, Mark-3’s got this sound suppression unit or something.  You hadn’t noticed anything when you’re shooting?  Just point and click, eh?  That’s cool.  I got to put food on my table too, you know.

You know, I’ve got a couple friends who could use a buddy like you.  There’s this one nerdy type guy who’s petrified he’s going to be killed while walking to the store to get his groceries.  I figure a well-built gal like you could watch his neck.  I was actually talking about the dermal plating, not your rack.

Ok, I suppose I deserved that.  Lemmie pick my face up off the floor here.

You know, while I’ve got this open, I’ve been itching to field test this new ablative armor I concocted back in the labs.  How about this? I’ll get that Mark-3 and the ablative armor in there for the price of just the Mark-3.  The customer’s always right.

So how does a lady such as you get into this line of work?  It must be tough, male domination, and all that.  Most of the lady-friends I have come in for augmentation, sure, but you’re probably the only one that jumped at the forearm wire blades.  Shut up?  Yes, ma’am.

Did you want my friend’s contact information?  All joking aside, he tells me people are coming after him.  He could use a bodyguard, and I think you’d do a good job.  He’s been having all these problems trying to interface with Michael.  Seriously, he could use a friend, and you’re the friend I think he should have.

I’m almost finished here.  Just need to attach these two last points, and I’ll re-layer the skin flaps on there.  Make a fist, please.  Good.  Now twist your arm to the left and right.  Ok, looks all right to me.  Now, let’s get that skin back on there.

You’ve been a reasonably good patient.  Let’s go back up front and ring this up for you.  Grab one of those teddy bears from the lower shelf there.  Yeah, that’s the one.  That’ll be seven thousand notes.  Hey, those bears are rare, I tell ya—collectors’ items.  You should see how much the big, big purple ones go for.

So you are interested in that job, eh?  I was hoping you’d ask before ya left here.  His name is Fredrick, and this is where we’re hiding him.  Keep him safe until he can figure out just what’s happening to him.  Poor guy.  He can’t even open a door by himself anymore.

The Cyborg character is a true mercenary-for-hire.  They have trained exclusively in the field of combat, specifically combat in the Underground.  They’re bodyguards, advance scouts, whatever they need to be to get the job done.  However, most Cyborgs have never been to the surface of the planet.  Why go up when the money is down there?

The Cyborg has the beginning Skill Packages: Combat, Durable Motion, and Vehicles. In addition, the character may also pick either of the following as a bonus Skill Package: Security or Medical.

The Cyborg may get either the Cyber Skin or  Dermal Plating option, as well as either a Forearm Wireblade, the Internal Gauss Pistol, or a JC-Jack option for free if they wish.  The Cyborg also gets their choice of thirty thousand notes worth of additional cybernetic options.  As a result of these upgrades, a Cyborg will never ‘evolve’ Psionic Abilities.

Michael may or may not be fully aware of the Cyborg.  Because most street doctors use custom devices if the Cyborg Slips or Falls, their hardware will still work.  The Cyborg may not begin the game with the Slipped or Fallen merits but may acquire them through gameplay. Most Cyborgs belong to a group known as The Cyborg Union.  This group sometimes provides valuable information regarding new jobs, hardware, and reliable street doctors skilled in various upgrades.  Whether the character is an active member or not is entirely up to the Player.  It is primarily a plot development tool.  Because some of the information circulated in the newsletters is illegal, active membership to The Cyborg Union can be dangerous.  This is mainly because many of its members are T-Pocs or other infiltrators operating on Michael’s behalf to root out the illegal information sources or hunt down unlicensed doctors operating stolen Rejuve Tanks.