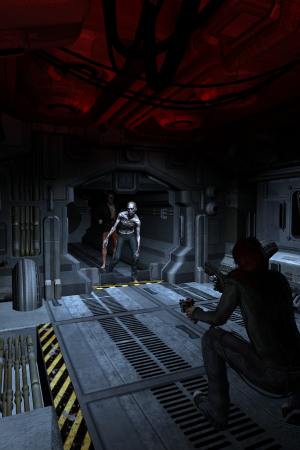 What follows is an excerpt from the various example adventure focuses. While there’s all manner of possible scenarios the game planner may run the players through, I wanted to provide some ideas on the sort of storylines that they might want to focus on, either for starting new games or enhancing existing ones.

One of the most chilling announcements that have ever been heard or uttered is “Proceed to the nearest evacuation facility.” Coming in a very close second is a similar announcement instructing everyone to “Proceed indoors, avoid all exterior windows and doors, and seal all air vents.”

Although groups such as AMV work day and night to detect and prevent the spread of malicious viruses and airborne diseases, that doesn’t mean that they are always successful.  While it would be a far cry to assume that host subjects regularly escape from the labs, sometimes a particularly nasty virus becomes airborne and manages to get into the oxygen recycling centers.  From there, distribution throughout a specific Warren can happen quickly, or something benign could easily turn into something sinister in the wild.

When faced with such alarms or situations, most people drop everything they’re doing and follow instructions. However, with memories of The Dark and The Tombs well engraved into the minds of everyone alive, it would be suicide to not do what is asked.

This Adventure Focus will probably be less about shooting and blowing things up and more about taking calculated risks to survive.  Be it choosing the right time to move, stay put, or deal with supplies, characters who actually think things through first will be better equipped to deal with the situation.  If there is an actual outbreak, how do the characters avoid contracting the virus or suffer the effects of the virus if they do?

Depending on the nature of the disaster and how long the disaster’s effects linger, some helpful skill packages will be drawn from Durable Motion, Vehicles, Social Graces, and, obviously, Medical.  The nature of the disaster does not necessarily have to be a viral outbreak.  Everybody might think the announcement is about Gen-Tac, but it could easily be the threat of a fusion detonation, impending earthquake, fire, or flood of ridiculous proportions, some bizarre nanomachines that force their decaying, flesh and blood hosts to seek out and bite the uninfected to expand their mind-controlled army, or, quite possibly, it could be The Voll finally got inside.

Several factors can make this Adventure Focus highly terrifying.  Isolation from other individuals and possibly even Michael forces the characters to think and act on their own.  To prevent the situation from spreading, air circulation may be cut off as well as passageways out of the Warren.  Entire areas of a specific Warren may be sealed off.  This can lead to suffocation on a massive scale.

Lack of information or a surplus of incorrect information can be more hazardous than the actual outbreak itself.  The Planner will have to make several decisions on what the disaster is, where it is located, how far this location is from the characters, and a list of several probable courses of action the characters might take to save their own skins.  Then, the Planner should determine what information the characters might obtain before the Info-Net and Michael shut down due to the overload and how this data will affect their course of action.

Ideal for a single adventure or a very short series, the initial escape eventually gets bogged down with additional survivors either trying to get away from the danger or trying to party as hard as they can while the ship goes down.  The only real thing that the characters will instinctively know is that the stations for the Impulse Carriers will probably be shut down for quarantine purposes.  Because ninety percent of the panicking population will go there first, heading there would probably be a terrible idea.