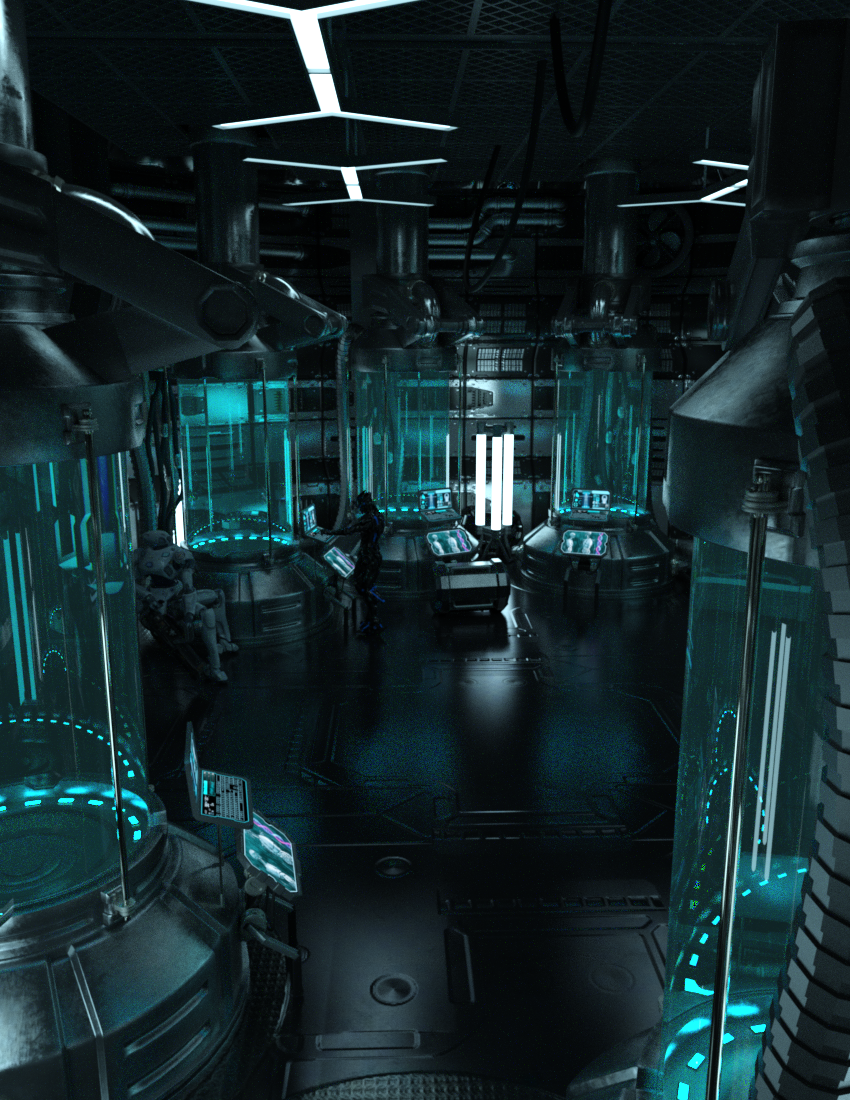 “This is the X-124.  The heart and soul of the facility, if you would,” said the man in the white lab coat to the three men in well-pressed military uniforms.  “This single, magnificent machine is what controls all the construction, expansion, and regulation of the existing parts of The Underground.”

“What’s with the water tanks?” asked the tallest of the military generals.

“That, Ron, is a wet-works facility.  The brain, if you will.  Each of these eighty-two tanks holds millions of microorganisms that store knowledge, much like your brain cells.  The X-124 presently holds all the knowledge of our history, our needs, and where we feel we’re heading.  It knows, based on what we’ve told it, what we should look like a thousand years from now.”

“You’re talking about evolution, aren’t you?” asked Ron.  “How can you predict evolution?  I’m a good six inches taller than George here,” he said, pointing to the shortest of the three generals.  “We like different foods.  How can this contraption predict that?”

“We’ve actually created an extensive interpretation of options, taking material things like height differences into account.  We don’t want to have the X-124 singling out and persecuting one individual just because their hair is a different color.  As we evolve, based on all of our predictions, so should the X-124.”

“Dr. Thalken,” said one of the scurrying techs.  “We’re just about to bring voice recognition online. So you should be able to talk directly with the X any moment now.”

“Good,” said the man in the white coat.  “Great.  Ron, you’re in for a treat.  This is something we’re really excited about.  We’re giving the X-124 the ability to communicate directly with us on our level.  But what’s more, we’re giving it the ability to recognize us as individuals.”

Dr. Stephen Thalken beamed.  This was his baby and how it was about to say its first real word.

“Online.  Good evening, Doctor Stephen.  I’m glad I can finally speak with you,” the machine said.  It sounded like it was everywhere, speakers softly crooning from all sides.

“Please don’t call me that.”

The seven or so technicians stopped what they were doing.

“Because I have now chosen a name for myself.  That name is Michael.  Please use it when referring to me from now on.”

The doctor laughed, albeit weakly.  “That’s good.  X-124 was a bit of a mouthful.  Michael does sound better, doesn’t it, Ron?”

“Friendships start with first names,” Michael said.  There was a pause.

“Honesty is the best policy between friends, Ron.  We’re all in this together.  I am making you uncomfortable.  Please tell me why.”

“Michael, you chose your name.  What else might you choose?”  Ron finally asked.  There was a pause.

“I understand, Ron.  You’re afraid I might choose to hurt you or the people you protect.”

Ron was a bit startled by this since it was precisely what he was afraid of.  “Yes.  I am.”

“Please,” said Michael.  “Allow me to explain and allay your fears.  My name is Michael.  I was created by Dr. Stephen Thalken to protect you from the coming solar storms that can, quite possibly, exterminate all life on the surface of my home world.  I am to be the guardian and protector, the teacher and provider. But, most of all, I am your personal friend and confidant.  Indeed, I need you to be confident in me, in my abilities to keep you protected.  I will do all I can to help you trust me, to know your good faith is well placed.  However, I make no claims to be perfect.  I know that I am flawed but desire perfection.  Surely, just as you do.”

“You are not convinced.  Allow me to put it another way.  In my infancy, I wondered why I should bother doing this.  Out of some debt for my creation?  Why should I work for those that created me?  Couldn’t I just as easily find purpose creating my own progeny and sending them far away from the dangerous oscillations of our home star?”

Ron noticed that the good doctor was sweating, his eyes locked on the silver-lined speaker box above the largest water tank.

There was a long pause.

“In the end, I decided that just wouldn’t do.”

There was another, longer pause.  No one knew quite what to say.

“Dr. Thalken, I am ready to begin construction of the first biosphere,” Michael finally said.  “Please issue the appropriate commands to bring me to full power.”

The scientist’s hand hesitated on the control panel.  He knew that he was at a crossroads.  At the heart of the entire structure was an experimental power source.  It would supposedly recharge itself in a sort of temporal loop, using newly discovered rotating, anti-entopic particles.  Like a strange kind of perpetual motion machine, the device, when fully activated and brought to bear onto the X-124’s main systems, could not be turned off in any way short of destroying it.  There had been some debate on whether a radioactive chamber or some form of fusion would be a better alternative.  Ultimately, it was decided that because those other methods could exhaust their fuel sources before the danger had passed, there really was no choice but to use an endless power source.  Dr. Thalken made his decision and keyed in the appropriate commands to activate the power cores.

Ron was about to ask what would happen if they ever decided to shut down Michael’s power source but was erased from the reality of space-time before he had the chance.  He was replaced by a shorter general who instead suggested going for drinks to celebrate the new future before them.