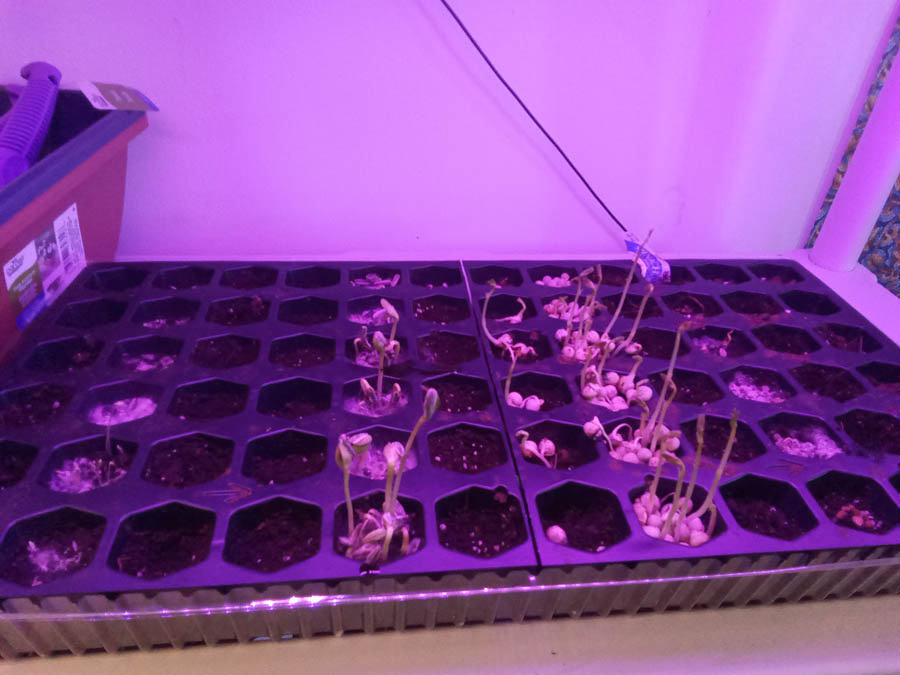 While I know that a lot of this blog details programming and art projects, I also thought I’d take a minute to show you about a small, new obsession of mine.

Microgreens are a kind of gardening/farming, where you plant a lot of seeds in very close proximity to each other, let them grow for about a week, and then harvest them before they grow into the entire plant.

While this seems a little counter-intuitive, let me explain.  When a seed first sprouts, it will generate two or three very small leaves which are, essentially, their starter leaves.  Based on what I’ve been reading, these leaves contain a huge amount of protein while also containing a lot of the flavor of the finished product.  So, for example, the initial shoots/leaves of a pea plant will have the flavor of peas, spinach sprouts will have the spinach flavor, etc.

I wanted to explore the idea further.  So I wound up investing a little in grow led lights, that can be powered via USB, and spent probably more than I should have on various collections of seeds and soils as a way to test and experiment with different ways to get plants to grow.

The videos that I’ve watched suggest letting the plants go several days without light so they can sprout up ‘seeking sunlight’ so I have planted a number of different crops and am covering them up.  I’ve started with lettuce, sunflower, peas, and spinach.

It’s been about three days, and while I’m seeing some growth on the peas, the other seeds are not doing much of anything.  My theory is that I probably overwatered them on the initial planting, but I’m going to give them some time to air out.

I have a number of different seeds, as I mentioned, and the next batch that I’m going to try and grow will be amaranth and a variety of corn that supposedly doesn’t require any sunlight at all to get to the growth stage where I can harvest it.

Why am I doing this?  Well, in the unlikely event that I need to be able to produce food for the short or long term in a basement, this seemed like a likely skill I would want to possess.

I also found some backup power supplies for -real- cheap at Walmart this past week, which spurred my jump into all of this.  Normally, these power vaults sell for $260 on the manufacturer’s website, but Wally was selling them for $89.  I had the additional funds at my disposal so I picked up a couple of them, and after some testing it looks like I can run a strip of the grow LEDs for 8 hours and only sacrifice one ‘block’ of battery life (out of what appears to be seven on the indicator).  If this is correct, I can grow plants for 3 weeks using these power supplies (one week per power supply) and that’s only for the days that require light.

I saw a posting on Facebook that said there’s a process to “Force” rhubarb to grow in complete darkness (harvested by candlelight) and they went on to say that you could actually hear the plants growing.  Personally, I think that would be too horrifying to listen to in the middle of the night when I was trying to sleep, so no rhubarb seeds in my supply, thank you.

Anyway, I wanted to take a short break from everything else I’ve been talking about to discuss another of my recent little obsessions.  I hope you are all doing well.  Have a great rest of the week!