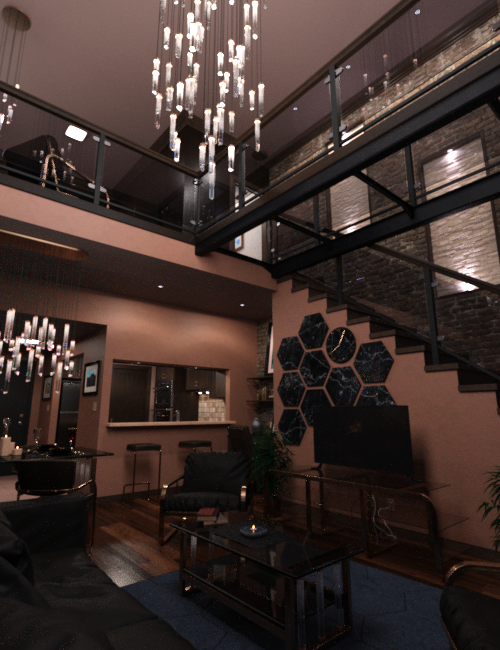 Since we’re getting closer to Halloween, I wanted to show you a little bit of work I’ve been putting into the Meditation project.

I recently watched the series Upload, which is a comedy series where wealthy people can choose, prior to their death, to digitize their personality and copy it to a digital afterlife.  The protagonist is a normal guy with a very controlling girlfriend, who pays for him to be uploaded basically against his will.  While there’s a lot going on in the show, it got me to thinking about what I’d like my personal digital afterlife to look like if I had any say in the matter.

Now, my work on my meditation program has dealt extensively with a lot of different environments that I could relax in or just go to when I am feeling a little too much cabin fever.  The Crystal Loft started off as one of those environments, but I’ve added a lot more to this place than I have with the previous locations to make things feel a lot more lived in.

There’s a kitchen area, a bathroom, bedroom, and there’s a solid crystal/stone motif throughout the entire area.  I’ve put the location in a city, where if you go out onto the patio, you can see the surrounding skyscrapers and the river flowing further away.

I also put in a handful of decorations for Halloween because, why not?

The area where I can just relax is actually on the patio.  I’ve added in street traffic and can watch the cars driving around the city, there’s a subtle wind sound effect that is more noticeable outside but not so much inside, and I gave the city a very distinct ‘fall’ setting with the trees and so on.

But at the same time, I’ve also gone a little further with the ‘life’ supplies aspect.  The pantry is filled with food, as is the refrigerator and freezer.  I’m halfway tempted to add some possible logic to the project where if you put various ingredients into a pot on the stove, it will produce a cooked version of the food.

I actually started researching how various taste buds are triggered and what materials activate them, as well as how many different categories of smell exist.  It’s not something that I expect will find its way into the project, but I enjoyed considering how a cooked meal would ‘satisfy’ specific cravings and moving their respective bars back into the green.

At any rate, the Loft is turning into one of my favorite environments.  I can sit on a couch and watch movies (via being able to view my PC screen on the television model), watch and listen to the virtual traffic as it bustles around outside, and I’m planning on adding some different resources to the loft so I can just screw around and brainstorm ideas without actually making a mess of my office.

While I wouldn’t define this setting as my ideal afterlife, I am enjoying building the location and incorporating various things like PDF readers (so I can read books, for example).  If I do wind up making the entire project available for sale, I doubt that I’d include this scene as it’s becoming a little too personal, but I’m still enjoying all the different things I am putting together.

It’s a little way off but Happy Halloween everyone (if I don’t blog before then).  Have a great week!