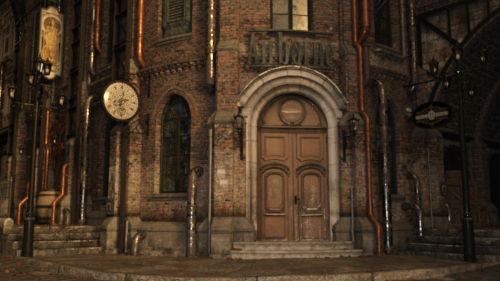 What follows is an excerpt of one of the suggested backdrops for adventuring in the world of Savalon, a city-sized “Warren” called The Dark. This is one of a few different settings that are provided, although there are many more cavernous, underground cities that exist but are not described.

Imagine a disease that completely obliterates the nervous system in an animal.  It simply destroys all nerve tissue but leaves the rest of the body intact.  Like an acid, the disease literally melts and devours every nerve and with incredible speed.  It’s impartial, destroying vital brain tissue as quickly as it would destroy the nerve endings at the tip of a finger.  Now, turn that disease into some kind of virus that physically affects cabling, power lines, and the like.  And you start to understand what happened to The Dark.

The Dark is an unusual Warren because of a total lack of external power supply.  Anything that was connected and online at 10111:11 thirteen periods ago and utilized some kind of power connection was simply rendered inert.  This effect was instantaneous and coincided with sixty, bright purple explosions that took place at various power nodes located throughout the dome.  Many people who were on hand to witness what has been called a terrorist attack from unknown forces recount the terror of going from a bright, bustling city to total darkness and silence.  Compounding the disaster, the blast doors and Viral Blockers all activated, effectively sealing the area off for nearly to three weeks.  The resulting riots reduced more than one building to rubble, and it took the combined efforts of every member of the military and the Warren’s police force to figure out what happened to their technology and restore order.  Unfortunately, Michael was entirely unavailable during the disaster to the people inside The Dark, and it was not for lack of trying on Michael’s part.  He was outright horrified when he lost contact with the entire Warren, convinced it was under attack.  He had armies of scientists working night and day and rescue crews on standby, managing to get the blast doors open after three weeks of effort and research.

For the people trapped in The Dark, it was a very long three weeks to go without contact to the outside world.

Today, all attempts to restore power to this Warren have failed.  New cabling run into the Warren from outside sources malfunctions almost immediately after it is set up.  However, internal power sources, such as portable generators and the like, seem to work okay.  Water and Air both seem to circulate fine, provided these systems use non-electrical means to operate, with steam power being the most prevalent.  If anyone is actually using any kind of electricity, they’re running on power cells or generators, or using portable, magnetic turbines with small coal furnaces to fuel them.

Because of the unusualness of the situation, Michael has offered good incentives for people to move out.  The remaining groups have learned to adapt to their environment and use their own light sources, like flashlights or other technology.  The current population numbers about thirty million, in an area designed to house about a hundred million.  So, people tend to have more spacious living areas.  Apart from the infrastructure failure, there is physically nothing wrong with the dome, surrounding Burrows, or the dome’s wall-hugging suites, so Michael has no real reason to prevent entry.  He tries to explain this to people who desire to move in, but since the roads still work, police and other services still exist, and some manufacturing facilities have set up complex steam-powered turbines to keep their buildings running, it seems a one-sided argument.

Michael still listens in where possible, but unusual areas of interference seem to keep him from prying into most people’s personal business.  These fields are enormous and, in some cases, encompass entire buildings, but they seem to fluctuate in size, position, and reliability.  He is not watching cameras either since new ones installed in public areas seem to suffer vandalism almost as soon as they’re put in.  Obviously, the area’s nature also draws criminal elements, but the plus side is a strong, competent working police force complemented by the military and a ruling government that takes itself quite seriously and is spared Michael’s endless recommendations for a better way to run things.

Plus, when asked, most residents say that they like the old, brick-covered buildings to the steel dome-scrapers that were so prevalent prior to the disaster and the sooty smell of burnt coal just lends to the antiquated aesthetic of this ‘powerless’ Warren.