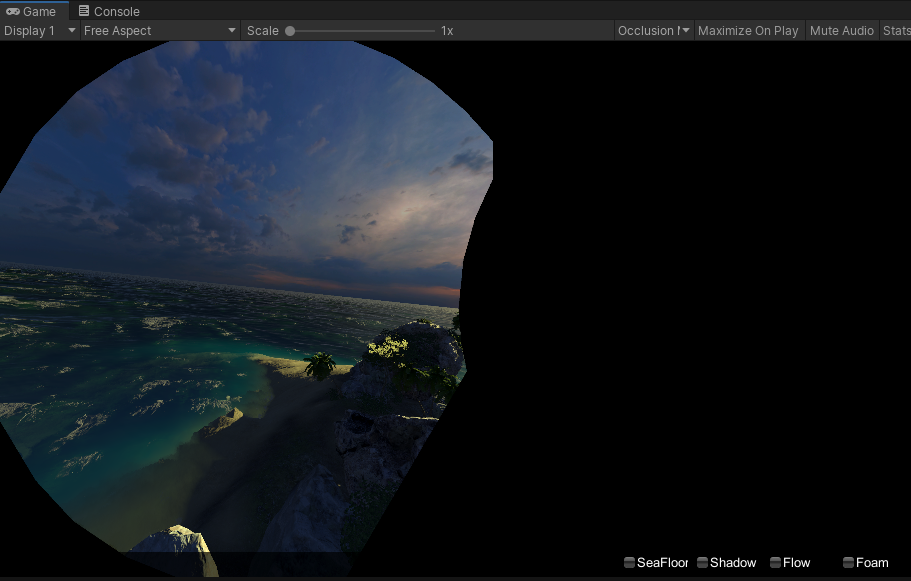 Despite taking the flu shot in November, I seem to have gotten sick. That’s okay, though, because even though I just need to sit in my recliner, I can still use the time to research and try to find a solution for a problem I’m running into with my mini golf game.

Environmentally, I like how my game looks. But I know it can look better. The water, for example, can be improved upon and there are many resources out there that show great quality imagery for the ocean and the like. I’ve invested in a couple of these and the situation always comes back to the same problem.

Unity just can’t handle VR and reflections/transparency for some reason.

The problem goes back years, and one would think by now, either Unity would have fixed this or somebody in the community would be like “Just use this two thousand line shader to overcome the problem…” but, alas, this isn’t happening.

As you can see from the above photo, this is what I’m dealing with. I get a great, wonderful picture setting the system to use the Light Weight Render Pipeline (which some of these resources require) and Multi-Pass, which is a method by which the system looks at the scene several times and builds the effect.

It looks great, if you’re a pirate and only use your left eye.

While my game is Pirate Island Mini Golf, no, I want people to use both eyes. Mini golf requires depth perception, at a minimum, and while it’d be a hell of a gag to be like “Now you can experience life with one eye!” it’s not what I think is going to win me up votes in the sales department.

The forums say that to avoid this problem, switch from Multi-Pass to Single Pass. When you do this, yes, you get left and right eyes. But the water/reflections? In the headset specifically there is a lot of garbage, horizontal reflections, hard, solid reflections of all physical objects projected into the water, far away from where a reflection of the object would logically be.

In short, Single Pass would only work if there is no water, mirrors, or other reflective surfaces to be found anywhere in the game. I’m doing this on a tropical island, folks, there’s got to be water.

I decided to try to pay for a year’s subscription for the newest version of Unity and also bought some “AAA” modules for world building this past Christmas and have been spending the last couple days dealing with this eye patch problem. Unfortunately, the newer version of the Unity3D did not fix this and it feels like I’m spinning my wheels. The visuals are too good for me to just give up and go with my initial water solution, not yet anyway.

So that’s what I’ve been working on and will probably keep at it into the next week or two, as I also try to recover from the flu.

Admittedly, I’ve gotten nowhere in my writing project. Same with my artwork. I suppose that I’ve been having the tunnel vision on this reflection problem, and that’s been taking a lot of my time.

I hope that everybody has a great new year! I’m looking forward with 20-20 vision and can’t wait to see what’s in store!

It isn’t easy to swallow pride while simultaneously grinding my teeth, but I picked up the telephone and started to dial the number that was taped to the refrigerator door.

I got her answering machine, which wasn’t surprising in the least.  Fortunately, I had actually planned ahead for this and was grateful it came down this way.

“Hey.  Just took my last final. I have an opportunity to get a better grade for chemistry, but I’m short two hundred for the class.  Do you think you could help out?”

I hesitated, trying to think of how the close this deal out.  “It won’t interfere with my work schedule, but I don’t have enough set aside to take the classes and it starts in two weeks. If you can help out it would be appreciated.  Have a good one.”

Or at least I tried to say that.  I think it cut me off before I got to ‘appreciated’ so I don’t know if I got my point across as a request or not.

I hung up the receiver, looked at it for a minute or so wondering if it was going ring.  Harry’s nails clicking on the linoleum floor broke my concentration and reminded me to breathe.