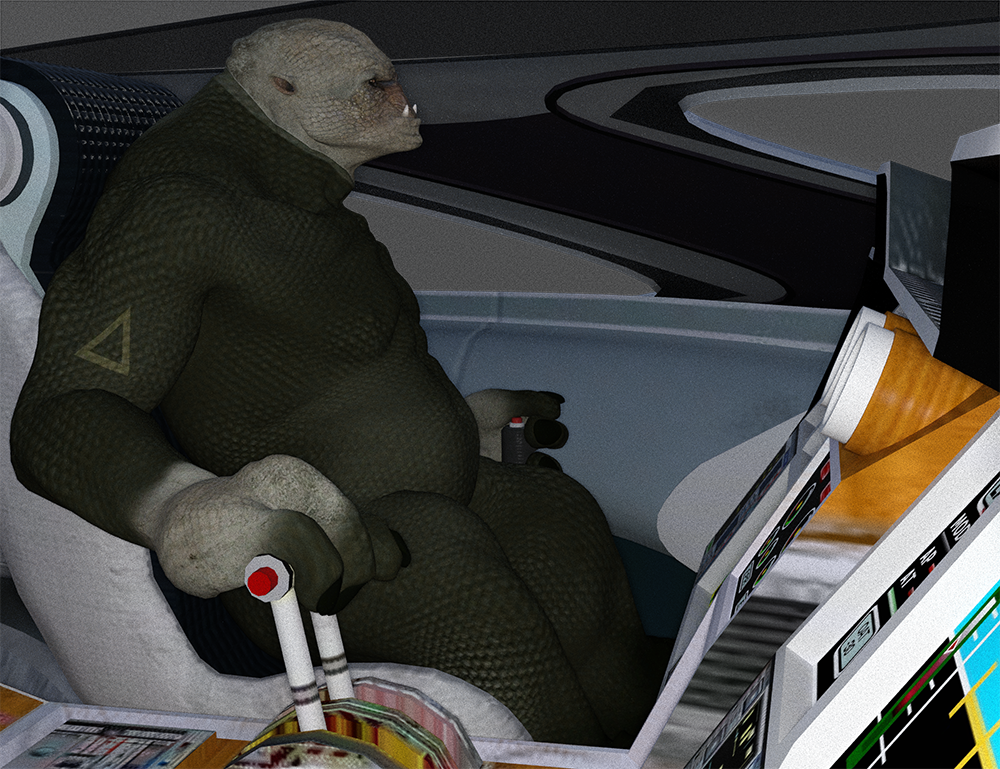 So as I mentioned in other posts, I utilize Daz3D in my artwork. It’s a great pose-rendering tool, and I’ve built up an extensive library of models for my renders. Using these same models in a software development platform, like Unity3D, requires purchasing additional licenses from Daz and these usually are expensive, but I caught a couple different things on sale and am now seriously looking into implementing these high-quality figures into my games.

For example, Pirate Island Mini Golf is, noticeably, devoid of pirates and I have been scratching my head trying to figure out how to add additional ‘juice’ to Pesky Humans to keep the game from feeling too grind-y.

When I was first working on Pesky Humans several years ago, I used Daz and Poser together to create animations of the grumpy, alien protagonist (above), pre-recorded and injected into the game as large video files. Now, with the advancement in technology, I can now actually create on-the-fly animations for these same figures, which I can use over and over, and don’t need to allocate space for video files, only audio.

This past week or so I’ve been learning and testing the animation tools from Daz and watching their effects within Unity. I created a test environment and put together a yoga-based breathing exercise animation some 450 frames long, and watched it go in VR.

The results are promising enough that I’m going to start investigating their usefulness in small animation windows (for Pesky Humans) and see how they render for a simple desktop game, get my feet wet, and once that seems to be on solid ground I’ll take the lessons learned and apply it to the Pirate Island Mini Golf game.

But that’s not all… folks!

Between my research on animation tools and testing the results, I’ve also been working a lot on what I consider my Magnum Opus. In early 1996, I started designing a fantasy role playing game that I called Tomb of the Purple Man. Naturally, I haven’t spent every waking second on that project, there were a lot of multi-year hiatuses splitting three or six month binges or lore-writing for the rule set.

I felt that it was a good project to undertake, clean break from programming which I was, admittedly, getting a little burned out on. I knew there was one specific section that I had been stuck writing for a really long time, so I made it my mission to complete that mental kidney stone of a chapter.

It passed with surprising ease. I dug out a lot of my index cards, went through them to review what I needed to write and what my next steps were, and came up with a list of sections left to complete.

I wrote up two new Lore-based sections, and wound up having to backtrack, completely rewriting a poorly cobbled together chapter about how experience works into a much more eloquent section about character growth via experience vs. obtaining powerful equipment. But as I was rewriting those sections, I realized that I really couldn’t remember how some of my own rule sets were supposed to operate.

I wound up killing two birds with one stone, by sitting down and using Grammarly to edit nearly three hundred pages of rules, descriptions, spells, and the like. I got a full refresher on how I wanted the game to feel, look, and play, and I also removed nearly four thousand grammatical errors and/or improvements to word flow.

If I can maintain focus the way I have been, I’m estimating that I can conclude writing Tomb by spring. This is while I’m also developing Pesky Humans, improving Pirate Island, and maybe adding a little extra stuff inside of Autumn Park. I can drop in a few other people in the park or some legit ghostly figures wandering around.

I know that I also need to dedicate at least some time towards my trailers and advertising the novels I have already published, but I haven’t quite worked all that out yet. Like, I put together the trailers, I’m just not sure where to post them effectively.

Anyhow, I hope that you are all doing well out there. Have a great week!