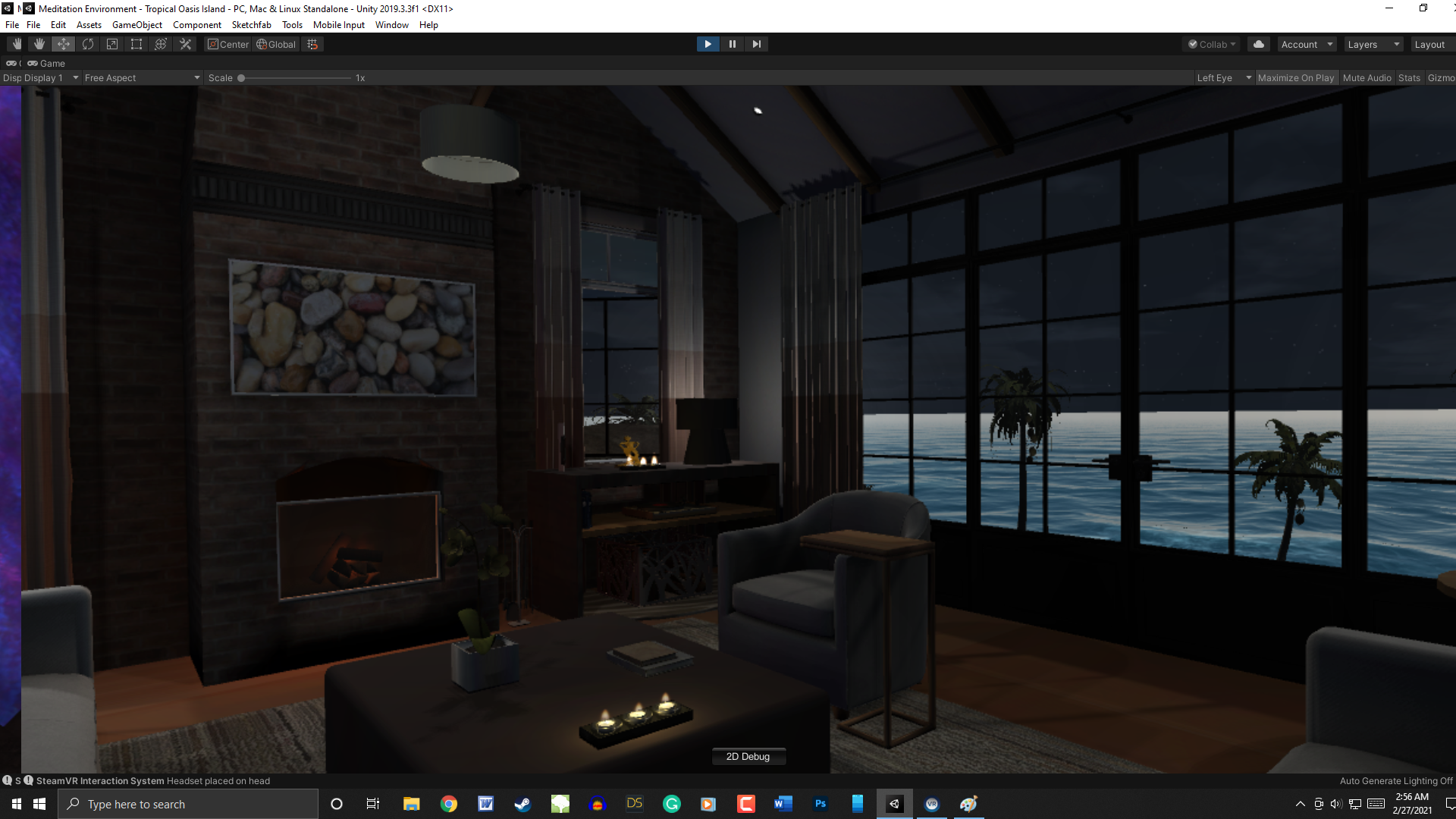 Pesky Humans is about to be released on Steam, and with the amount of time I’ve invested in the project, I feel like everything has been done that needs to be done. Sure, if there’s a bug reported, I’ll fix it, but unlike Pirate Island, I feel that Pesky Humans is done, complete, and requires no further work on my part beyond unexpected troubleshooting (which, honestly, I don’t think will be necessary).

So what’s next for me?

Well, as I mentioned in other postings, Pirate Island is needing a little more focus and love. I’ve been learning how to import and utilize a specific set of models for Unity, and there is a bit of a learning curve involved.

So rather than muck about in a project that is ~60 gigs in size with ‘experiments’ I started a new project altogether, which I was just referring to as my “meditation space” for lack of a working title.

And I didn’t think it needed one. It wasn’t something I planned to distribute, it was more of a personal project to create an environment for myself, a place I could go to and relax.

And, well, it gave me an opportunity to learn how to import animated figures, get them to scale properly, and so on. It was through this space that I was able to tinker with and ultimately set up the Complaining Troll animation in Pesky Humans.

I’ve had a surprising number of people tell me that they are having difficulty sleeping. They like white noise environments but are too distracted by so many things to really shut the brain down.

I started researching meditation for a book I was writing a year or so ago, and I bought a couple reference materials on the subject. I started to put together a number of environments, each with their own merits, to act as a place to go and chill without any specific goal.

Space Station: Meditation was born from this extended effort. I’ve created a large space station with a teleportation chamber, which then will beam you down to multiple locations in the planetary system.

The station itself has several areas of ‘white noise’ in the form of ship engines, hydroponics equipment, and ongoing radio chatter from ships warping into the system.

I’ve created a ‘Lava World’ environment, a ‘tropical oasis home’ on an island, a decorated crystalline loft in the middle of downtown, a chateau right next to a lake in a wintery, mountainous region, and other places too. Sketches, mostly, as I threw together a couple of different ideas and tried to see what worked and what didn’t.

I started thinking about if this is going to be a tool, could we make it an educational one? Have a character within the world perform guided meditations, or explain the difference between a lotus position and simply sitting cross legged, or something to help the novice learn.

This project is in the initial planning stages, of course, but here’s some prototype artwork showing off some of what I’ve put together. Mind you, this is set up for VR, and the screen shots are from Unity itself rather than the game (which means there’s a display/quality drop), but I’m actually pretty excited to show these off!

Hope you guys are having a great month so far! Looking forward to showing you all what is coming next!