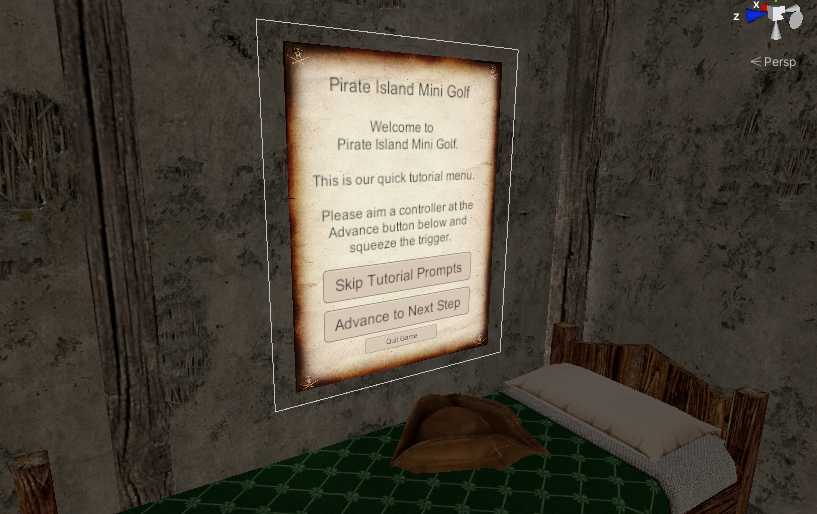 As I mentioned in an earlier post, I’ve been focusing on small milestones to help me feel a sense of moving forward with the integration of the 2.0 API into the game system. My prior goal was working with the physics system to get a club that didn’t phase through the ball when trying to take a swing… still needs some tweaking as the ball is very enthusiastically responding to the hits (i.e. fires into the sun when it should be a light tap) but hey, it’s no longer going backwards 35% of the time I’m taking a swing… so that’s great progress!

Yesterday and today’s goal was the menu system, which required a complete overhaul.

The new API doesn’t quite interact with the menu systems the way it did in the previous version, so research and effort was required. I was finally able to get the menus that used to point and click/point and drag to start behaving in a similar way.

Tonight, I finished this up so I’m now able to go from the initial build loading scene, to starting a game, taking swings with the club on the course, and watch my golf ball recklessly sail off into the ocean.

So the rest of this week is going to be dedicated to tweaking the physics a little more so the ball behaves like a rational object, and then I’m going to be recording some videos of actual game play to throw up on YouTube and work on the Steam Store Assets. I’m hoping to get this done by Wednesday.

In the back of my mind, there’s the question of re-creating the scripting for the non-club items that can be found on the island. This is hopefully just going be script replacements allowing the objects to be held when clicked on (like the club) but as I have several dozens of different things to modify, it’s going to take a little bit of effort to make sure it all works. The Radio, I think, is probably going to be the most complicated of these adjustments to make. I’m hoping to get this done by Friday.

The MultiPlayer question will be addressed in a couple weeks. This week, I’m going to complete the necessary work for the single player game to be polished enough where I can put it on Steam as an “Early Access” title and get some feedback from the players that will hopefully like the game yet ultimately complain that it’s not MultiPlayer.

I need to go over the code modifications I put in during my first pass at MultiPlayer, because the golf balls are definitely not responding the way they should when a course is over, in single player mode anyway. I don’t want this to bleed into MultiPlayer games.

Anyhow… things seem to be going according to my set schedule. I’ll be updating you guys again real soon. Stay tuned for updates!