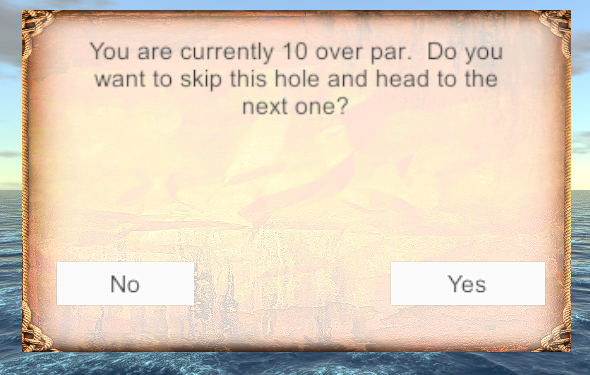 So I had this large list of wants and a smaller list of would-like-to-haves before I put my game on Steam.

Last night I completed the last mission-critical want, and several of the would-likes off my list. The major component was the option to Mulligan, where once the player gets more than 10 over par, the game asks them if they want to just advance on to the next hole.

For some reason, I had some real difficulty getting the menu to cooperate. I had to re-create the canvas a dozen times over the course of nearly a week, but it finally cooperates enough for the player to throw in the towel for some courses they just can’t make any headway in.

I know there are a couple courses that may be frustrating. Some courses end with a slight incline to reach the hole, and others end in a circular ‘drop area’ that has a small, flat raised center where the ball needs to land.

While I don’t really have much of a problem getting the ball to land within a couple of strokes, some of my play-testers have… voiced frustration… at what they refer to as Skee-ball golf. I modified the angle/height of the angled course as a result, hoping to make it a little easier to land… but I could see the potential for frustration.

So, once the game sees a given player is 10 over par on a specific hole, they have a choice to keep at it, or just jump ahead. The system asks again at 15 over, and their last chance is 20 over par.

Then there were little cosmetic things, like turning off the HTC controller model when the player is actually holding the club for instance, and some orientation issues of rewards when they’re sent to the house. The next item checked off: I added some signposts for one particular set of courses that players may not find easily otherwise.

Lastly, I wanted to put together another save-file, this one for game configuration. Specifically, volume and the day-night cycle state. While I thought I had initially completed this successfully, I discovered that putting the values -back into- the game were not taking place as intended. This required some reworking of the relevant code, but it seems to be good now.

The next day or two I need to take some new screenshots and record some game play videos for the store layout. These are the last things I feel I need to publish this as an Early Access – Single Player version of the game. I still have things I plan to do, such as optimization and the like, but the project as it stands is ready for general consumption with the idea that there will be more development on this project as well.

Hope you are all having a great week!